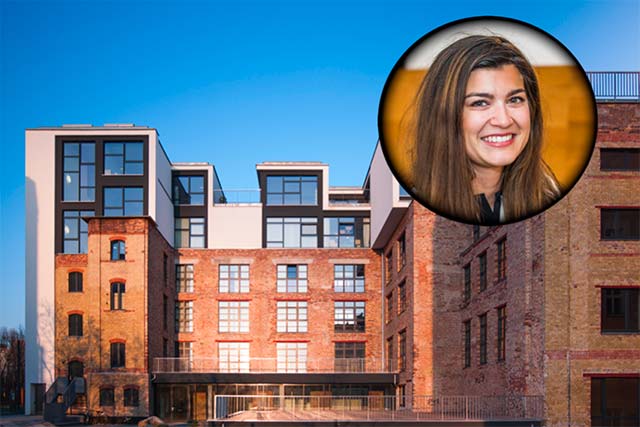 Jasmin Samsudeen, Head of Outpost, Berlin.
The Outpost is located at the Factory in the center of Berlin next to the former Wall.

Swisscom has been active in Berlin since 2015 and today also operates an Outpost there. The German capital has one of the fastest-growing start-up ecosystems in the world and its tech scene is rich, vibrant and full of enthusiastic entrepreneurs. Jasmin Samsudeen is responsible for the Berlin Outpost. Here she talks about her day-to-day life.

The Outpost Berlin got its start with the project “Siroop.” At the time, Swisscom wanted to build an e-commerce marketplace together with Coop. The foundations for it were laid with the support of experienced entrepreneurs and start-ups, as well experts on platforms and digitalization. Company builders like Rocket Internet often find role models for their companies in business models that have already proved to be effective in the United States or China. They then give them the final polish practically overnight, taking them from a start-up to a potential IPO. At this point, e-commerce is no longer setting the course for the industry in Berlin. From the areas of hyperlocal, FinTech and digital marketing, to specialized software solutions and fields of applied artificial intelligence, the Berlin start-up ecosystem is booming in the growth fields of our future.

Dynamic Networking at the Factory

Since the days of “Siroop,” the Outpost has been housed at the Factory in the center of Berlin next to the former Wall. In addition to well-known start-up companies Like 6Wunderkinder, Soundcloud, Twitter, Uber, and Zendesk, corporations such as Siemens, Deutsche Bank and Audi have taken up residence at the Factory. These companies cooperate as incubators for other start-ups such as Finchtechdb, which among other things participated in the Kickstart accelerator and is now creating a FinTech map for Swisscom Digital Business.

A dynamic networking environment was an important criterion for us in the selection of the location. Unlike a classic co-working space where everyone is in it for themselves, the Factory is a kind of community and offers regular meetups on a wide range of topics. It’s also possible to conduct a focused search there for start-ups and freelancers to support us in our projects.

The Factory is in many ways the starting point for networking in Berlin. On the Factory campus, there are workplaces that can also be used by Swisscom employees, networks, consulting services, event space and other forms of support.

The Berlin ecosystem is in general characterized by this idea of community. The openness and cooperation among young entrepreneurs is palpable throughout the city. People support each other, learn from each other and try to move forward by combining their efforts. In addition, Berlin has a lot of creative potential and has a stimulating internationality. The city is also subject to constant change.

Berlin is and will remain just as much of an attractive location for large and medium-sized companies as it is for start-ups. In addition to Swisscom, Microsoft, Daimler, Vodafone, Lufthansa, SAP and Google, numerous large corporations are establishing a presence in Berlin with their innovation outposts. The Berlin start-up cult is attracting foreign investors as well as a German and international workforce. Although life is becoming increasingly expensive here too, Berlin has one of the lowest costs of living among European capital cities.

In Europe, where the start-up scene is highly fragmented, Berlin epitomizes the e-SME sector. Small and medium-sized enterprises are extremely important in the German-speaking world in particular. Many developments in the digitalization of their business sectors, even if they are only niches, are emerging here.

In all these areas, we keep our eyes and ears open for Swisscom in Berlin. Our representatives, for example local.ch, which along with localcities.ch has digitalized all services related to municipalities and associations, are cooperating with experienced digital experts in Berlin. In addition, start-ups serve as inspirations, role models, potential partners and future service providers.

Innovations that have proven effective in German-speaking countries usually work in Switzerland as well. In this respect, we are organizing partnerships, putting collaborations on track and building cost-effective prototypes in record time with the help of our external production site. These help Swisscom to test new types of services and products at an early stage and to validate them for their customers.

Swisscom employees from Switzerland who come to Berlin for a few weeks or months at a time are also participating in these projects. As part of the “Stars@Outpost” programm, which is also offered in Silicon Valley, we offer talented and interested colleagues the opportunity to be inspired by this fascinating environment in Berlin and to gain new perspectives on their projects.