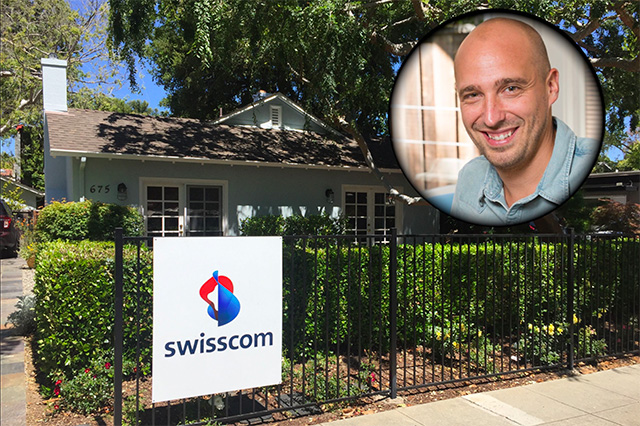 “Back to the Roots!”

In a multi-part series, we look back at the Swisscom Outpost’s 20 years in Silicon Valley. In the fourth and final Part, we hear from Lukas Peter, who has been at the Outpost since the beginning of 2016 and oversaw its relocation from Menlo Park to Palo Alto.

In spring 2017, we moved the Outpost back to Palo Alto. The main reason for this was the oversized office in Menlo Park, where the original intention had been to build an external production site with over 50 developers for the Swisscom Cloud project. But after that project was stopped, the rental costs were out of proportion to the ten or so employees who were ultimately still here.

It was clear to me that we were not only looking for something more affordable, but also for something that looked less like a corporate office and exuded more of the Silicon Valley groove. In addition, in various internal conversations, the former location at 636 Waverly Street was repeatedly mentioned as the ideal. So it began to be apparent that the search was heading in this direction, that is to say, back to the roots!

A Stroke of Luck

Then as luck would have it, I stumbled across the building on 675 Forest Avenue in practically my first search on Craigslist. This was perfect not only in size, but also in location: It’s just off University Avenue on a parallel street and you can reach downtown Palo Alto and the train station in a few minutes on foot.

Since everyone had warned me beforehand how difficult it was to find something suitable in this area and above all something affordable, I was of course thrilled. On top of that, I was under quite a bit of time pressure when I started searching in March. Our contract in Menlo Park was expiring in April, so things had to be done quickly. In hindsight, you can probably call it a stroke of luck!

After the contract was signed, the move started immediately. Unfortunately, I had to go to Switzerland at that point and so I couldn’t help my colleagues with it.… But they did a great job and everyone pitched in so that we could switch to the new address as quickly as possible.

Before that, we were able to repaint the building and make a few modifications. We also bought new furniture so that we could outfit it properly. As I said, we didn’t have much time for it and there was a certain amount of skepticism among the staff members as to whether it would ultimately meet our needs.

With the help of an interior decorator, who fortunately was very flexible, we managed the whole switchover and outfitting within two or three weeks. That was really in the style of a lean start-up.… At almost the same time, the new Pirates Hub was being set up in Zurich, which took more than six months. The way we did things over here was a bit different!

With the move into the new location, the Cloud Lab and the Outpost teams were also able to be brought together. The joint move and the new space, which allowed for closer cooperation, certainly contributed to that. In addition, we have a spacious yard here, which lets us conduct team lunches and barbecues.

But we are also better situated for external events now and can appropriately represent Swisscom. In autumn 2017, for example, we had a visit from a 45-member delegation from ICT Switzerland along with political representatives from Switzerland’s Council of States and National Council (Blog). Last year, we recorded a total of more than 300 guests at the Outpost. There was everything from start-ups to university professors to CEOs. Today, we’re a hub for the whole Swiss economy.

This has been accompanied by a change in the Outpost’s positioning. On the one hand, we tend to the local ecosystem, while on the other hand, we establish connections to Swisscom and to other companies and institutions. This is also expressed through our claims to be a Gateway to Global Innovation and a Gateway to Switzerland. We consider it our mission to represent both Swisscom and Switzerland in Silicon Valley.

In addition to our representative function, our current field of activity primarily includes four areas. We invest in local start-ups, as we recently did with fastly, through the Swisscom Digital Transformation Fund, where the former Outpost director Stefan Kuentz is responsible for US investments with Swisscom Ventures. Or we go the opposite direction and connect Swiss start-ups like Mila with the local ecosystem.

Then we do tech and new business scouting here and bring the resulting discoveries and contacts to the business units in Switzerland. Examples of such discoveries are the companies ZecOps and Mesh++, which Swisscom and its customers have recently been collaborating with. Or we launch entirely new products like the marketing system beem, which my colleague Simon Zwahlen has built up here and is currently being launched in Switzerland with a newly founded team as a new product in its own right.

With our local engineers as well as close cooperation with Next Generation Telecom International, we have the possibility of conducting technical due diligence for our potential investments in our Innovation Lab. In the area of tech scouting, we can quickly test products or initiate proofs of concept from here for potential new products, as in the example of beem.

And the area of partnerships is very important. Especially suppliers like VMware or Dell Technologies are of great importance for the entire Swisscom IT infrastructure. The interaction with Ericsson is also essential as they operate an Innovation Lab with more than 500 people here. In addition, we are involved in various organizations such as the Telecom Council, the Cloud Foundry Foundation or the MIT Media Lab.

Growth with Berlin and Shanghai

Swisscom’s Outpost concept no longer includes only a presence in Silicon Valley. With Berlin and Shanghai, two more satellites have been launched in the last two years. This clearly expresses Swisscom’s aspiration to be present in other hotspots around the world in addition to the established Outpost in order to be able to keep track of trends and emerging developments in the future as well.