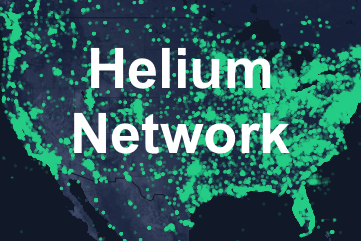 In a time where there are over 18,000 cryptocurrencies, most of which are propped up by speculation, it’s difficult to determine which horse to bet on. Among these projects is the Helium Network which is classified as a utility token which most recently (03/2022) raised $200M in a Series D round of funding by major players like Andreessen Horowitz, Google Ventures, and Deutsche Telekom pushing the valuation to $1.2B. This is not financial advice, but here is the case for Helium Network which can help you determine if it’s a Secretariat or a Zippy Chippy.

The Helium Network is a crowd-sourced wireless network of open gateways that users can depend on while operators are rewarded for maintaining backed by blockchain. Basically, an individual can host their own Helium hotspot miner ($500 for equipment) and provide local network coverage for devices such as IoT sensors. Helium is in over 180 countries with more than 900,000 hotspots. Adding more hotspots to the network expands coverage while ensuring dependability. Currently, this network follows the LoRaWAN specification, which is not ubiquitous in the US, on unlicensed spectrum, specifically using the 915 MHz (US) and 868 MHz (Europe) frequency bands. Today, Helium is in the process of rolling out 5G (and potentially WiFi) but we will save that for another blog.

In order to understand the Helium Network, we need to define some keywords that everyone can understand.

How does it work? 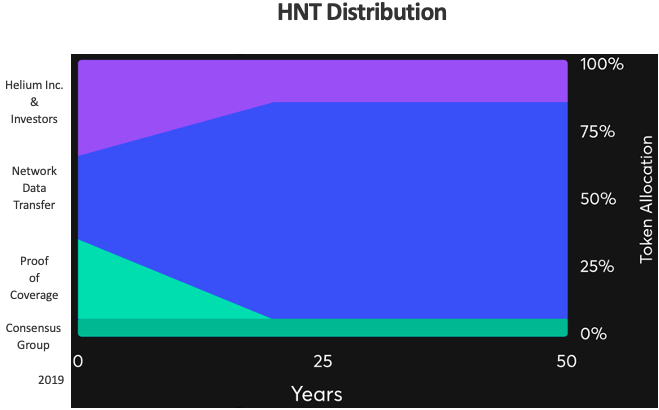 Operators are incentivized to maintain hotspot gateways by earning Helium token ($HNT) as rewards. Every month, a set number of $HNT is minted which initially was distributed to Helium Inc. and investors (35%), Hotspot Infrastructure (35%), and Network Data Transfer (30%). The monthly minting amount is halved every two years and the distribution amounts are adjust every year as show in Figure A.

1 data credit allows you to send/receive up to 24 bytes of data on the network. The target devices are light weight IoT devices that send small amounts of data. An example may be a tracking device only sending latitude and longitude like “37.4488532,-122.154716”. Sending the coordinates unoptimized is 22 bytes costing 1 DC. But, as with many specifications, there is more metadata when sending/receiving data so more bytes should be expected. Once the total number of bytes is determined, divide that by 24 which gives you the DC requirement.

>Show me the money!

There are two primary ways a gateway operator is rewarded $HNT – Proof of Coverage and Data Transfer. If your gateway was involved in sending data, it’ll get paid the data credits. Alternatively, to create a reliable network, Helium rewards gateways that can prove their coverage. A validator in the consensus group will challenge a gateway to prove its coverage. Once the challenged gateway receives the challenge message, it broadcasts a challenge response. Like the children swimming pool game, Marco Polo, any gateways who witnessed the challenge response confirm the proof of coverage. All participants in the Proof of Coverage earn a share of the $HNT reward.

Here are some examples of tasks rewarded in the network… 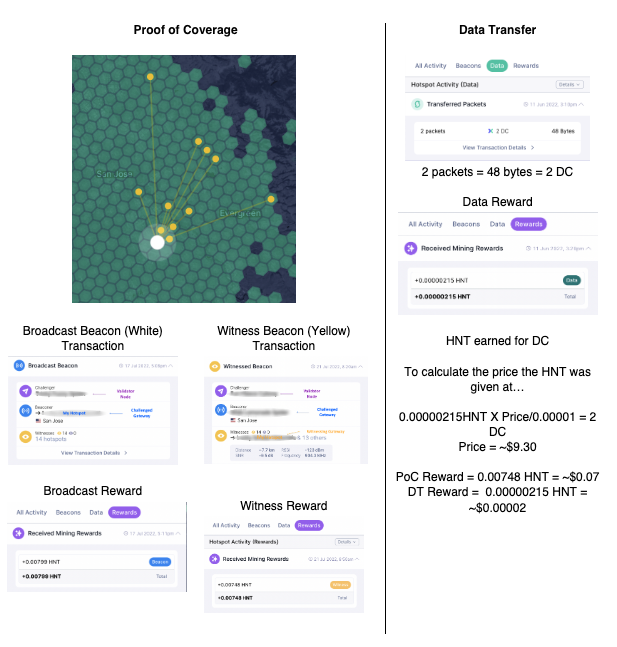 If You Do Not Use It You Lose It 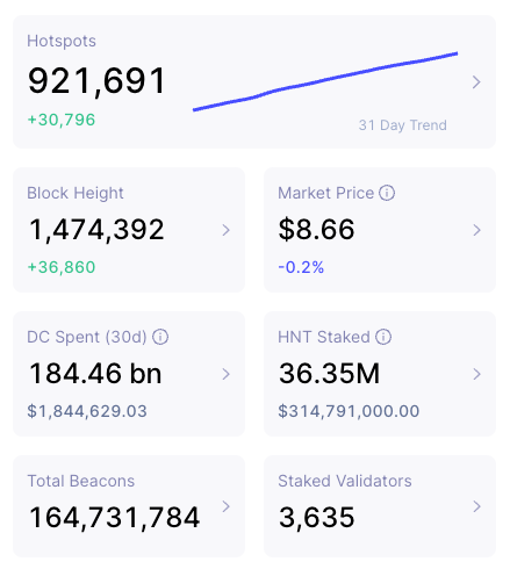 There’s a direct dependency on IoT growth for Helium LoRa to grow. Helium is very transparent with network statistics as shown in the screen capture figure B. It shows good Data Credit usage numbers nearing $2,000,000 a month. This gives the impression that loads of LoRa data is being transferred and Helium might win first place but taking a closer look, you will see Helium might not even get out the of gate. The Helium Transaction Schedule (Figure C) shows the various Data Credit costs associated with transaction. 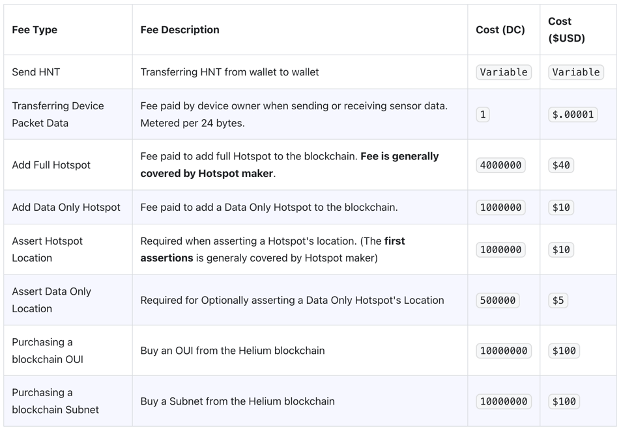 With access to Helium data, we are able to determine that the largest Data Credit usage was from adding new gateways to the network giving a pyramid scheme feel to the whole thing. Like the network relies on more operators to join to bring usage/money into the system. It turns out that only about $2000 worth of actual data was sent on the network over the last 30 days. Below (Figure D) is a 30 day breakdown of the data credit usage in USD actually came from. 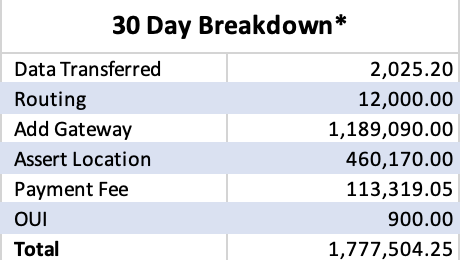 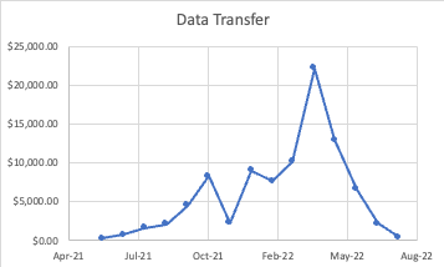 *Dataset was incomplete at time of evaluation.

The lack of actual data transferred has not always been this low. Figure E shows the data transfer trajectory was heading in the positive direction until April when the entire cryptocurrency market crashed. The crash in $HNT price could explain the low data transfer usage. For example, a user may have bought an $HNT for $50 that is now worth $8. If that user burns that $HNT now, they will receive 800,000 DC as opposed to the 5,000,000 DC he would have at the price he bought it at. In essence, the user is getting less for what they paid and may “HODL” burning the tokens. 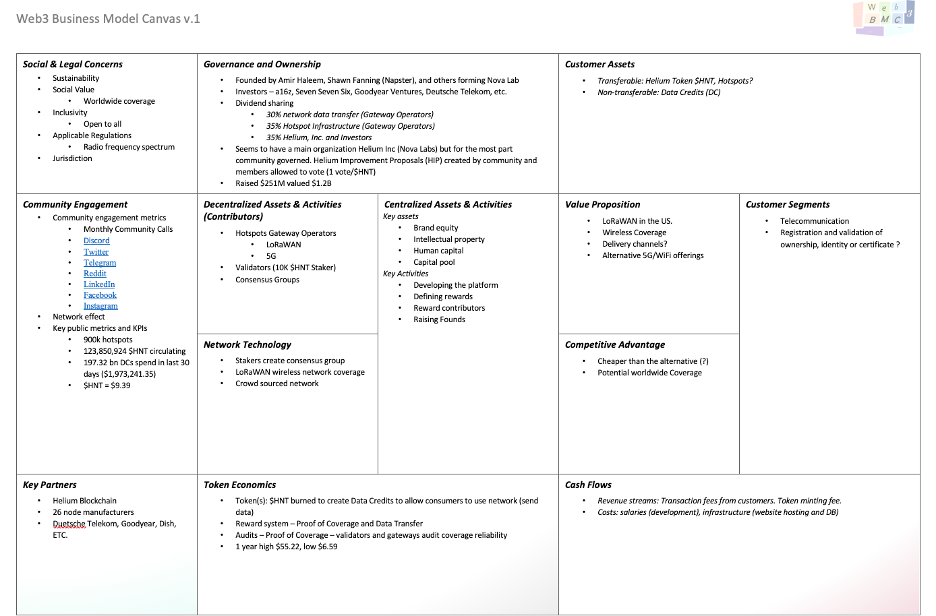 Telco Disruption or if you can’t beat them, join them?

Internet wireless infrastructure provided by telcos or internet service providers (ISP) has been and still is centralized and commercialized. The Helium network takes an open/crowd sourced decentralized approach while being mutually beneficial to producers and consumers. With concerns of how your data is used by ISPs, Helium moves towards complete trust and transparency while keeping your data private. The need for Helium becomes even more apparent as wireless network providers continue sunsetting earlier generations of mobile connectivity that IoT devices rely on (low power, high range). Creating a LoRa network in the US, where it isn’t readily available, allows 2G or 3G IoT consumers somewhere to migrate to. Helium may, however, create opportunities for ISPs. They can commit to the same dependable coverage while outsourcing this connectivity to Helium. This becomes even more prevalent when trying to provide 5G coverage. Offloading some coverage to Helium while not having to manage these networks, ISPs can trade in some CAPEX and OPEX cost. DISH Network has done just this during their 5G expansion. Similarly, T-Mobile has also announced a Helium partnership. Being able to offload 5G traffic to Helium to fill in the gap where the crowd sourced network already exists while prioritizing their own expansion in location with higher demand.

The Helium journey is still in its infancy after launching in 2019 as is this blog series. Although there may not be a lot of demand or actual use of the Helium LoRa network, it serves as a proof of concept while Helium sets its eyes on 5G. It may be a Zippy Chippy today but may become a Secretariat. More blogs to come covering the 5G deployment, deep dive into the blockchain, first hand point of view of a Helium hotspot operator, and a consumers perspective.

Please do not hesitate to reach out if you have any questions: Zohaib “Zee” Khan, Cloud Engineer @ Swisscom Outpost, Palo Alto, California, US, zohaib.khan@swisscom.com