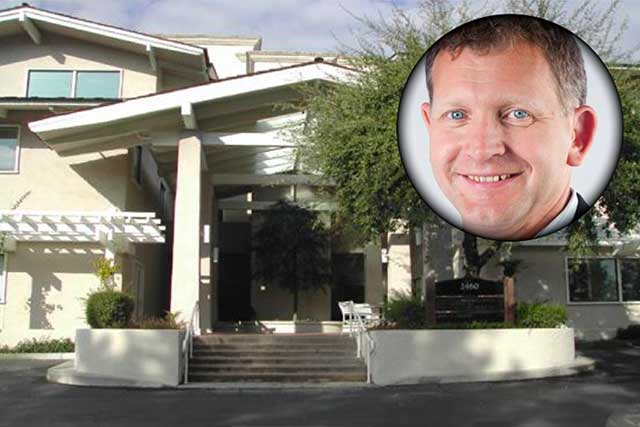 “The speed of technology adoption was unprecedented”

In a multi-part series, we look back at the Swisscom Outpost’s 20 years in Silicon Valley. In Part 2, Stefan Kuentz, who was at the Outpost from 2007 to 2010, takes his turn.

When Ursula Oesterle left for Singapore in 2007, I took her position in Silicon Valley. My personal goal was not only to establish a strong and conspicuous foothold in Silicon Valley, but especially to discover new commercial potential for our enterprise business as well. In the first phase I was still with Thomas Jakob until he decided to pursue training in Boston. After that, the Oupost was a “me, myself, and I” operation for some time, which was a very intensive phase for me.

Our first task was to find a new office in Palo Alto. We struck pay dirt with Regus in the Bank of America building on 530 Lytton Avenue, which gave us the chance to dynamically lease additional rooms when there were visits from Switzerland. At this point there were still almost no start-up accelerators where we could have rented space, which is actually almost unimaginable today. Plug&Play was still under construction directly across the street, but it was only dedicated to hosting start-ups.

My early days here were dominated by scouting out new opportunities. The discovery of innovative companies that were relevant for us was still pretty adventure-filled back then, and also time consuming. It was like searching for the proverbial needle in a haystack. There was an enormous number of events, often smaller ones that were to a certain extent invisible, mostly evenings with free drinks and networking. What really mattered was somehow managing to be present everywhere and establishing as many contacts as possible and thus spreading out into the Silicon Valley network. One advantage was that most things back then took place in the area of Palo Alto. Not much was going on yet in San Francisco as far as these things were concerned.

At that point, many of today’s Silicon Valley giants were just emerging. Facebook – still with an invisible office in the middle of Palo Alto – was in the process of superseding MySpace. I also remember my visit to Tesla. It was in a small garage in Menlo Park, where they were busily working on three Roadster prototypes.

The most dramatic event for me, however, was the introduction of the first Apple iPhone. Investors had previously pumped enormous amounts of money into mobile solutions. With the platform that the iPhone suddenly offered, and later with Android as well, many of these developments were made obsolete and numerous companies then disappeared pretty quickly. This transition brought an enormous boost to innovation in the Valley, and with it came the opportunity to bring new start-up solutions into Swisscom. As one of the first telcos, for example, we managed to bring the management platform MobileIron to our Swiss customers via the Outpost.

And then there was the emergence of the Cloud. This was the time when you still had to explain what that even meant back home. The somewhat shaky analogy was “electricity from an electric outlet.” Interestingly, in the phase between 2007 and 2009, in addition to Amazon, Verizon was a pioneer of CaaS (computing as a service), of course in addition to numerous start-ups. I still remember vividly the “Web 2.0 conferences” dominated by Microsoft with small, hidden booths of Box.net and Dropbox.

In 2008, the financial crisis finally reached Silicon Valley. Not as severely as in other areas of the USA, but still very noticeably. It could be seen most clearly from the traffic on US 101. Suddenly it became possible to drive from Palo Alto to San Francisco in around 40 minutes, including stopping for coffee at Starbucks. Today you have to plan a solid two hours for that trip. Numerous acquaintances of mine lost their jobs and saw their pensions/401(k)s cut in half. Unusually for the Valley, the mood for once was only halfway optimistic.

It was also a time when scouting was less necessary. High-quality start-ups were proactively knocking on our door in the search for cooperation and naturally for capital as well. The “giving and getting little favors” culture of Silicon Valley, which meant helping one another out with introductions, expertise, or access to know-how, was crucially important at that time. Many of my best relationships with the CEOs and VCs I still interact with today are from this time. In retrospect, the financial crisis made the Valley somewhat more down-to-earth and approachable, at least for a short time.

The visibility and recognition of the Swisscom Outpost in Silicon Valley was enormously important for us and the foundation of our activities. This was crowned with an award for “Most Supportive Carrier” by the Silicon Valley Telecom Council. This award is determined by a poll of over 200 startups and entrepreneurs. For us, this was a huge boost in motivation and a direct confirmation of our work in Silicon Valley.

Shortly afterward came the time when I was operating alone in the Valley. So the offer from SK Telecom Ventures, who invited me to move into their office in suite 100 at 2460 Sandhill Road, came at just the right time. In the middle of all the big Silicon Valley VCs, this site represented an impressive foray with a new profile for a Swisscom Outpost location.

The proximity to SKT Ventures was very valuable and inspiring. We had direct exchange with high-potential start-ups, and of no small importance was that I was permitted to make use of high-quality infrastructure, with board rooms that made it possible to receive distinguished visitors from Switzerland. And there were an increasing number of visitor of that type since the Outpost was gaining in prominence in Switzerland. Among others, we had the Swiss Post and the Swiss Economic Forum as guests.

The Foundation for the First Cloud

Looking back at my activity, one of the biggest highlights was the launch of the first Swisscom Cloud in late summer 2010. Still a bit ahead of its time, it was based on start-up technologies from Silicon Valley and on cooperation with Verizon’s CaaS. A new Customer Enterprise Service arose from a developmental idea for which the cornerstone had been laid at the Outpost. The idea of the cloud substantially influenced activities at the Outpost during the following years. At that point, the time had come for me to return to Switzerland.

My attachment to Silicon Valley never ended, however. After my return to Switzerland, I transferred to Swisscom Ventures and thus was able to maintain the majority of my contacts and relationships, and my feelings of closeness to Silicon Valley along with them. This made it possible for me to make numerous successful investments, the majority of which would not have come about without this foundation.

It’s incredible how Silicon Valley has continued to develop during this time. I admittedly underestimated how rapidly Silicon Valley start-ups would scale globally once the internet was ubiquitous – the speed of technology adoption was unprecedented. Such a fundamental step from the semiconductor era in such a short time was difficult to imagine only 10 years ago. That’s reflected today in how large the companies from the backyard garages and with the hidden conference booths have become. The concentration of wealth that has accompanied it is likely an indication as well.

Success also had a downside, however. With every visit, Silicon Valley seems even more crowded and expensive. The scale it has attained is not healthy. It’s almost impossible to find a company there today with founders that do not live at the “poverty line.”

The young talents who flock here from around the world still form the sustainable breeding ground for Silicon Valley. I believe this source is increasingly in danger of running dry, with the result that Silicon Valley is more of a hub where the “picks and shovels” are. The pools of young talent and the innovation that goes along with them are elsewhere, however.

Corporate innovation and the important core function of “outposting” can no longer rely only on one or two outposts at the heart of high tech for discovering innovations. A targeted expansion of these activities in the future therefore seems essential to me.

Recorded by Mark Walti, Palo Alto, 10 January 2019. Stefan Kuentz is now a partner at Swisscom Ventures with a focus on B2B enterprise technologies and is responsible for US investment activities.